It’s a question that’s been debated on pitches, in changing rooms and in pubs ever since the first bit of artificial grass was first laid. So we’re going to settle it once and for all…

If you’re reading this then you love football, or you’re hoping to impress someone that does. Or, you may have stumbled on this by mistake, but stay! And pull up a seat. Here’s why 5-a-side is better than 11-a-side…

Due to the size of a 5-a-side pitch, and the fact that there’s obviously less players –  you get so much more action on a 5-a-side pitch. Every player is crucial to a team’s performance and a single player could win or lose you the game. Compare that to 11-a-side. A player could easily hide all game at right-back, avoiding getting stuck-in, whilst nursing a Sunday morning hangover. You can’t do this in 5-a-side. Every players has their role. Expect to have hundreds of touches in a game, and have ample more opportunity to practice that skill you’ve been practicing all week.

In an 11-a-side game you can expect some long, darting runs, however the ball will go out regularly. Corners, goal-kicks, your attempted chest-down-and-volley that ends up going for a throw-in. Depending on the standard, it’s not uncommon to watch some long hoofs from defence fly over your head to the other half, like a long-ball game of tennis. This isn’t good for the player, or the spectator. With 5-a-side the action is non-stop (apart from goal celebrations of course.) There’s no throw-ins, or opportunity to waste time playing for a corner. For the players, and the spectators, there’s hardly any down time, and therefore plenty of highlights. 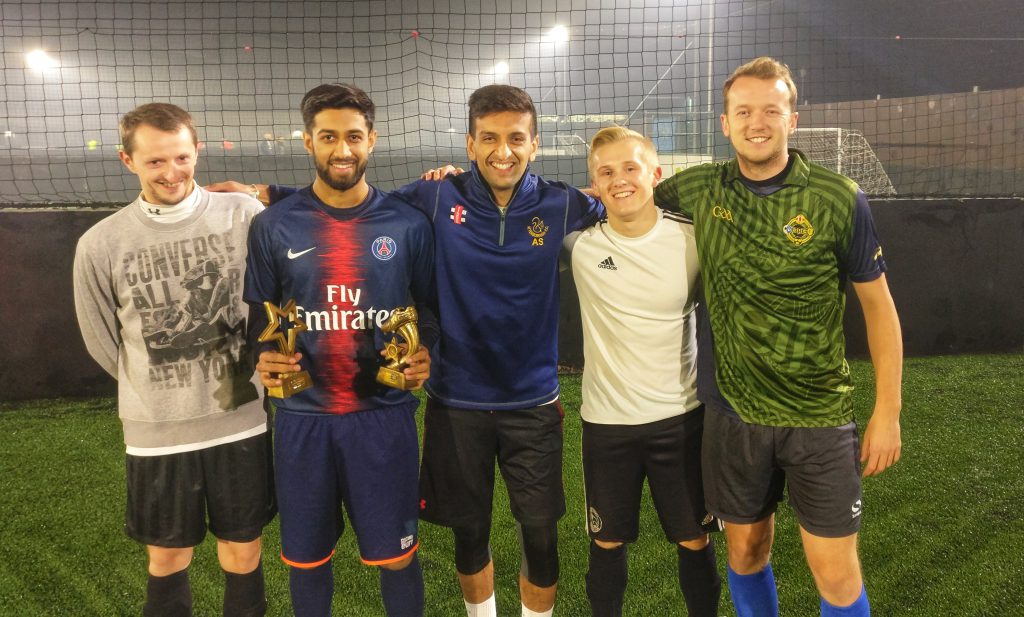 You know that feeling when you’ve ran your heart out on a 5-a-side pitch for 40 minutes and you want to keel over and die? Don’t worry, that’s called getting fitter. It’s high intensity, with regular bursts of maximum energy exertion. You know those lazy players that turn up to 11-a-side and insist on playing at the back, and stay right in the corner doing nothing because they’re unfit, or hungover and have been dragged out of bed to play, or they like football but have a hatred of exercise? You can’t do that on a 5-a-side pitch. If you’re playing; you’re getting fitter. You can’t avoid it.

It’s often said that playing football is actually better for your fitness than just going for a jog or lifting weights. It can help cut the risk of heart disease by reducing blood pressure and cholesterol levels, and is also a great way to lose weight. 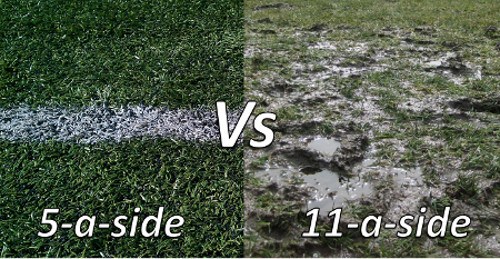 When it comes to football at an amateur level, there’s no debate, the facilities on offer to 5-a-side players are so much better those available to ones that play 11-a-side. Torrential rain the night before? Your pitch is buried somewhere under 12 inches of snow ? The council have had a funfair all weekend on your usual pitch, and now your penalty area looks like a swamp, with raffle tickets and half eaten hot-dogs trodden into it? Your game will be unenjoyable at best, or completely postponed and you won’t be getting your football fix that weekend.

Why would you want to play on a muddy, dog-fouled mud pit, when you could be playing 5-a-side on a luscious synthetic 4G surface, designed to give you the experience of playing on the best pitches imaginable instead?

The superb consistency of the pitches is a reason why the 5-a-side game is suited to a technical, passing game, where you can also show-off your skills. Whilst the 11s game is often more suited to a “Just hoof it down field, Dave” kind of game.

If you ask us, there’s really no competition, and we’re the Kings of 5-a-side. Book a game today.