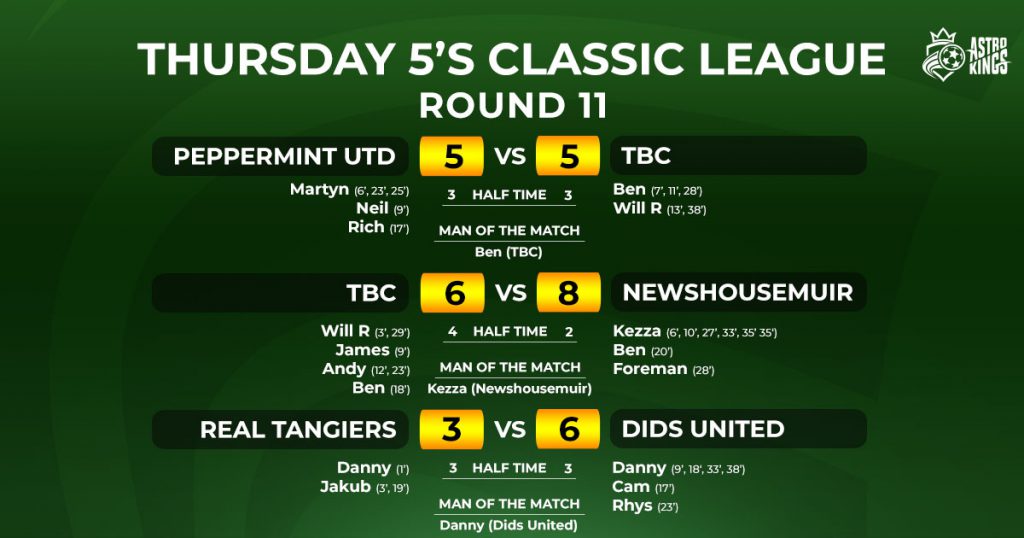 In their final game of the Thursday Night league, Peppermint United faced TBC, a team they lost five-three to the first time round. With nothing at stake this evening apart from pride, both teams wanted to end the season on a high. It was Peppermint that opened the scoring, when Martyn hit the target in the sixth minute, his first of three. Goals were then exchanged throughout the half which ended on three a piece.

The second half was equally matched. Both teams wanted to win, but struggled to breakaway into a big lead. With the scores at five-three to Peppermint, man of the match Ben scored his hat-trick goal for TBC, to close the gap. Then with just two minutes to go, Will R equalised with his second. A great match to end their seasons.

Due to missing fixtures earlier in the season, this was TBC’s second game of the evening. They no doubt hoped they still had fuel in the tank to get a result against a Newshousemuir side that have won their last two. It started perfect for TBC when Will R slotted home in the third minute. Unfortunately for TBC, Newshouse have golden boot runner-up Kezza at their disposal, and he helped them end the half with the scores four-two to TBC.

Heading into the second half four-two up, TBC would have thought the game was theirs for the taking. However, fatigue perhaps gradually came into effect and TBC soon ran out of steam and gave an opportunity for Newshouse to get back into the game. With the scores at six-all with just five minutes to go, man of the match Kezza scored another two to make his night’s haul six, and secure an inspired comeback win for Newshouse.

This top of the table clash was no doubt the biggest game of both Real Tangiers’ and Dids United’s season. With equal points before the game, the title rested on this one game. The winner would take all. Real wasted no time in making their grab for the title, when Danny and Jakub scored in the opening two minutes. Dids were not to be rattled though, and Danny Brown and Cam helped the scores to be all square at three-all at half time.

Dids defended faultlessly in the second half, and didn’t concede a goal. Rhys found the net, and man of the match Danny added another two to make his personal tally four on the night. The game ended six-three to Dids, who were crowned champions. Not only this, with his 36 goals and four man of the match awards over the course of the season, Danny Brown helps Dids win an unprecedented league treble. 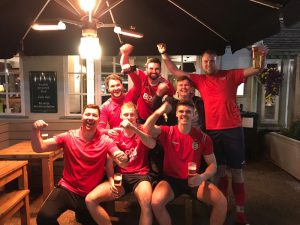