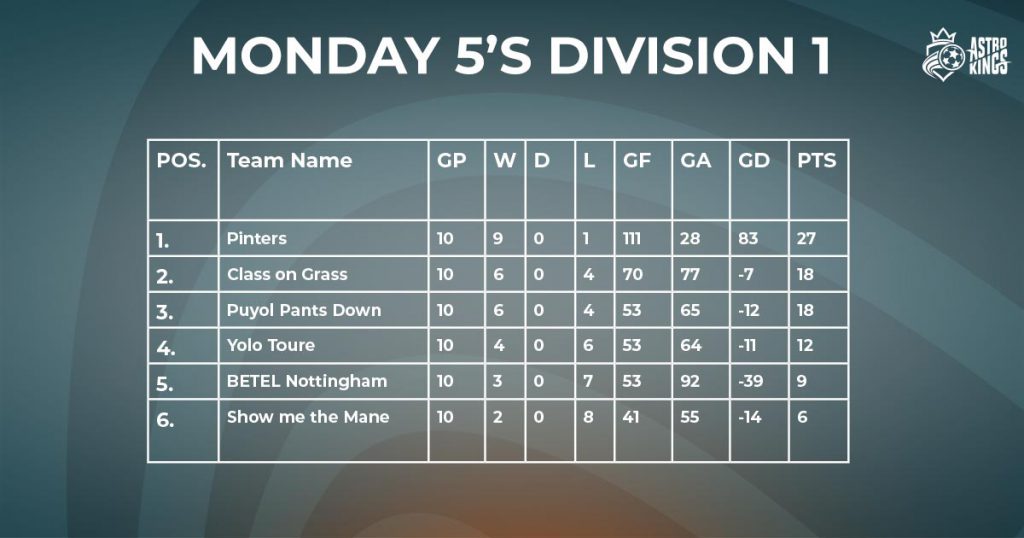 We normally expect Division 1 to come to a close finish, however Pinters ensured we were all left with little doubt who the champions are. A goal scoring production line led to Pinters scoring over 100 (111) goals over the course of the 10 game season. In fact they became the only team to finish the season with a positive goal difference, such was their dominance. The team will be sure to thank Jordan Phillips who led the line ruthlessly, carrying himself to the golden boot award. Elsewhere in the league Phil Gerry (Puyol Pants Down) was able to claim the title of player of the season, after consistently performing week in week out. In spite of this, Puyol Pants Down still finished the season with a goal difference of -12. If nothing else, this indicates the sheer fire power that teams throughout division 1 possess. Ross M (BETEL) will be undoubtedly heartbroken to have lost his grip on the golden boot on the very last week of the season, due to Jordan Phillips’ thumping home 13 goals in one match (certain sources have reported leaked footage of Jordan buying the opposition keeper an entire crate of Heineken that night). Meanwhile Thierry and Riece can take solace in their place in the team of the season, thanks to several stellar showings. The remaining three members unsurprisingly being made up of Phil (Puyol), Jordan (Pinters) and Ross (BETEL). With the new season underway, all eyes will be on Pinters to see if they are able to repeat their league dominance. 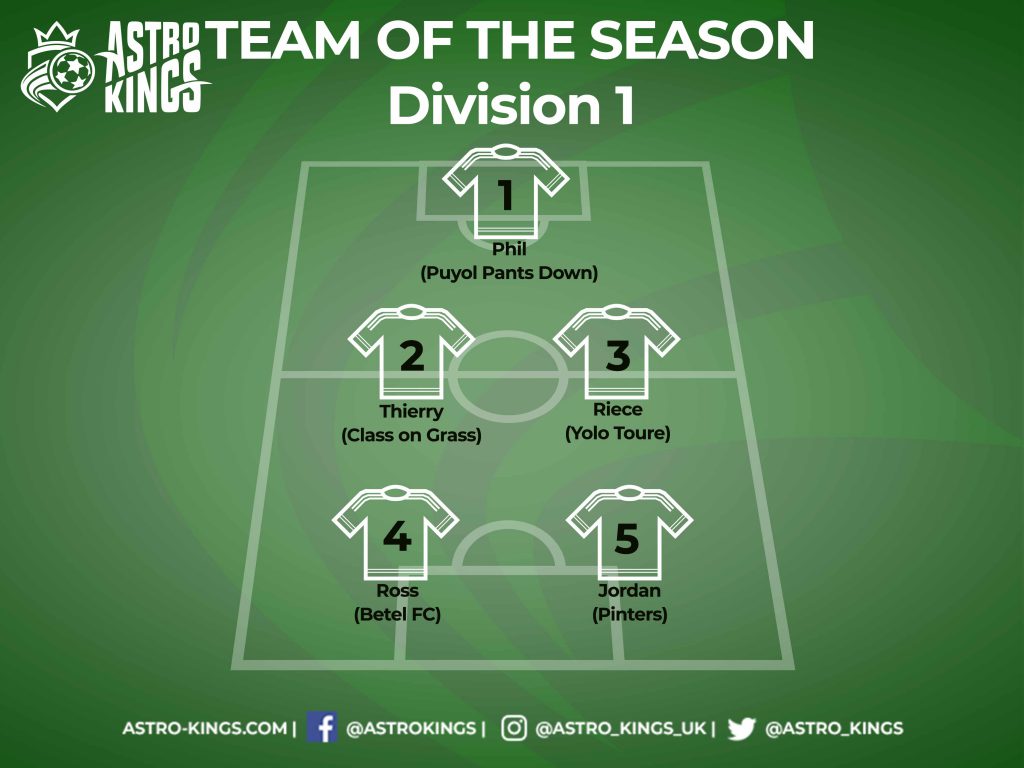 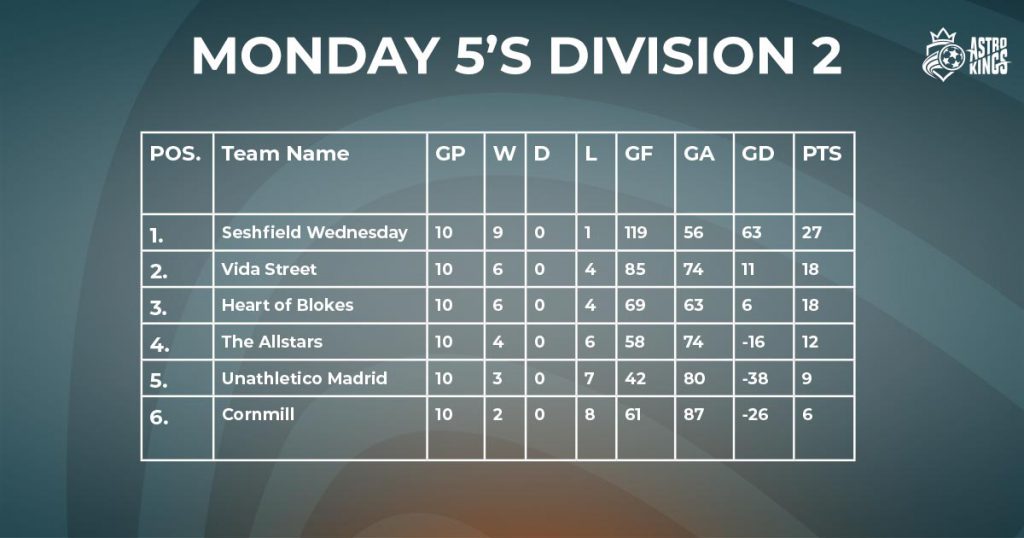 Seshfield Wednesday started this season with everyone wanting to know they deserved to be in division 1, and after the season they had there are no doubts they were worthy champions. Dropping points just once throughout the entire season, scoring the most goals in the league whilst conceding the least, the Seshfield boys stomped their authority on division 2. Leading the line for Seshfield throughout the season was Kieron Harrison, the most prolific scorer throughout the division he was a worthy golden boot winner with an eye watering 55 goals (We are being told that Notts County will be offering him a contract any day now). Not only did Harrison finish with the golden boot, but also bagged himself the player of the season leading to a hat trick of silverware for the goal scoring machine. In the team of the season we can find three Seshfield players; Dodge (GK), Tizer and Harrison. Meanwhile Kaylum represents Vida Street and Zane shows that The Allstars are worthy of their name. Vida Street and Heart of Blokes battled doggedly for second place, with Vida Street snatching it thanks to a goal difference of 11 to Heart’s 6. 6 points behind in fourth we find The Allstars on 12 points, just nudging ahead of Unathletico Madrid’s 9 points. Unfortunately this season was one to forget for Cornmill, finishing bottom on 6 points despite scoring 61 goals. 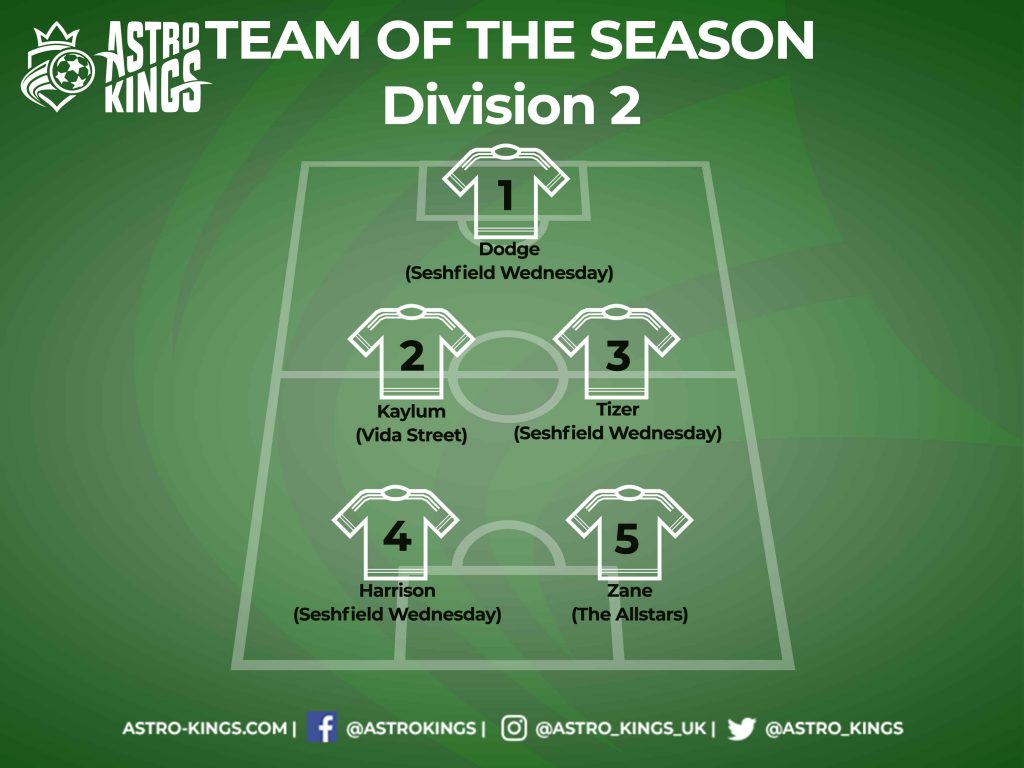 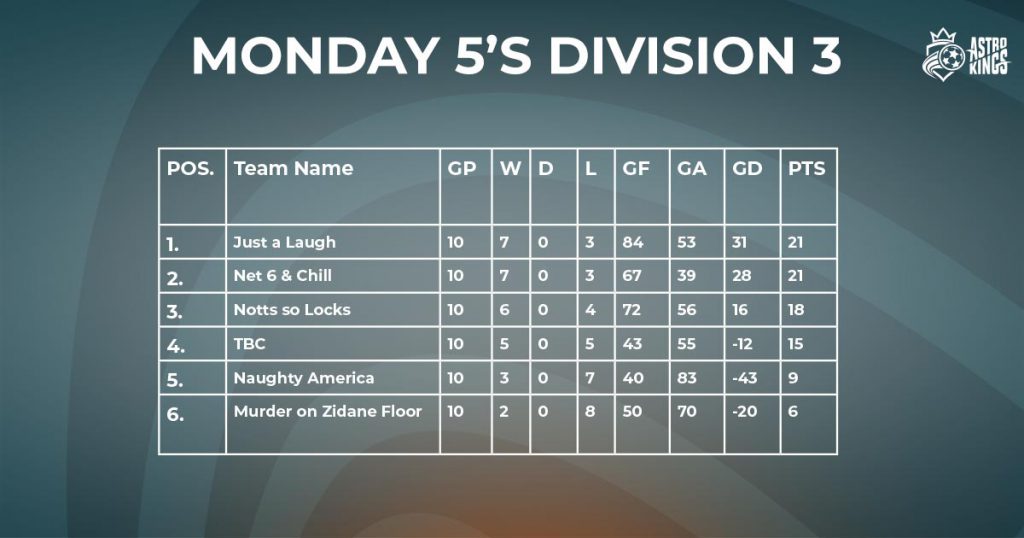 Division 3 was without a doubt the tightest league this season, with the winner being decided by goal difference. Just a Laugh were able to pinch the championship with a goal difference of 31 to Net 6 & Chill’s 28, leading to a heartbreaking end of the season for the Net 6 boys. We can be sure Rhys (Just a Laugh) won’t have to buy a round for the rest of the year. As his 24 goals ensured, not only the golden boot for himself, but the title for his team as well. Whilst Notts so Locks will be disappointed to have finished third in a tight title race, Tom Marriot will be able to take pride in earning the player of the season award. TBC found themselves comfortably middle round with 5 wins and 5 losses, giving them plenty to build on for the next season. Naughty America will no doubt be breathing a sigh of relief to have avoided bottom despite having a defence that seems to have been up of wet tissue paper, conceding a whopping 83 goals, leading to a goal difference of -43. Despite have a better goal difference than NA above them, Murder on Zidane Floor found themselves at the foot of the table. However they were able to take our hearts with one of the better team names throughout the three divisions. Both the top scorer and player of the season (Rhys and Tom) unsurprisingly find themselves in the team of the season. Sam (Net 6 & Chill) deservedly finds himself in goal for the team of the season, after conceding just 39 goals in the league. Jame also represents Net 6 in the team of the season whilst the final spot in the team of the season is filled by Sean from Notts so Locks. 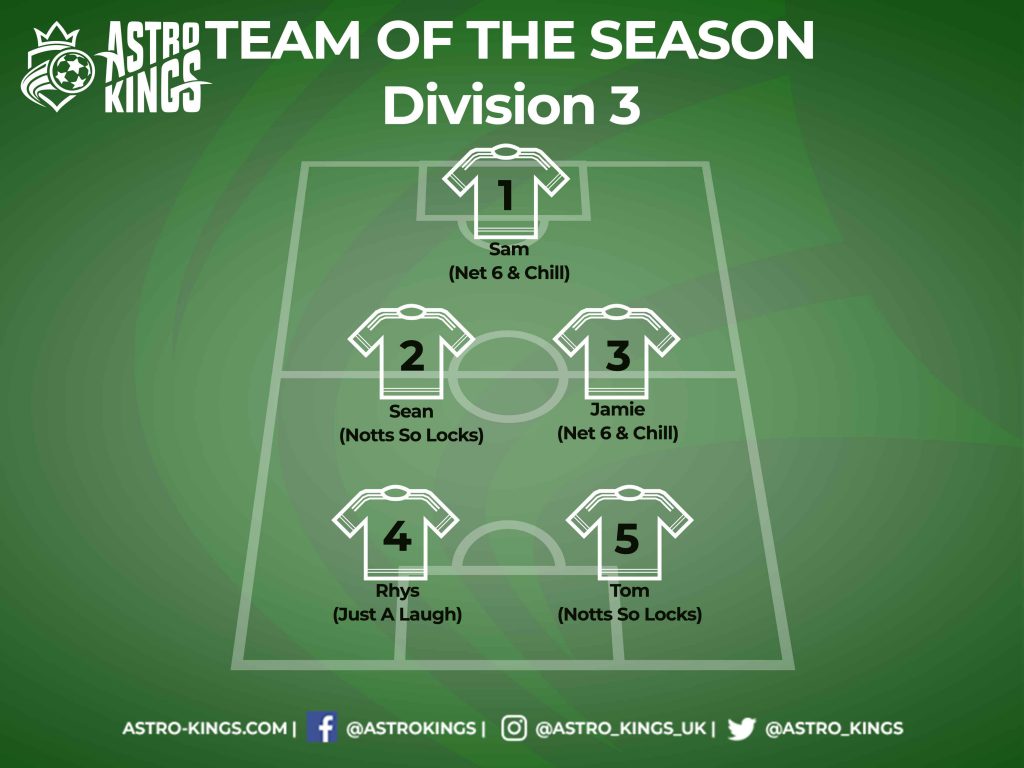 We’d like to thank every single person for playing and we hope to keep seeing you all week in week out. Thank you for creating a fantastic atmosphere and helping us ensure we are the best five a side league in Nottingham!

And if you haven’t signed up yet, then why not?! Sign up here