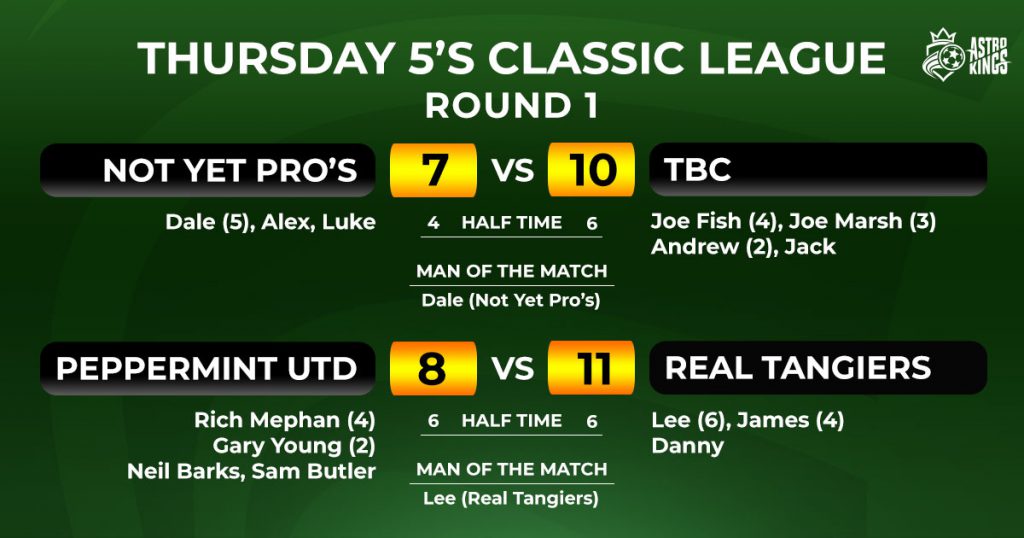 Kicking-off Astro Kings’ new Thursday league was Not Yet Pro’s who were hosting TBC. The NYPs  claimed the bragging rights for the first goal of the season, and this was followed with two more goals in quick succession. TBC showed that despite a shaky opening few minutes, they had no plans to be a walkover in their debut game. What happened next was a superb comeback. Three goals from TBC leveled the scores, but NYP snatched one back, before they conceded another three, and let their early lead slip away. The half ended six-four.

The second half proved equally as entertaining for the neutral. Both teams played attacking, flowing football, and the goals certainly didn’t dry up. TBC extended their lead by another two, before NYP pulled one back, with Dale on fine form on his league debut. TBC were getting into their stride though, and all outfield players got on the score-sheet before the final whistle signaled their 10-7 victory. A great opening game with both teams showing great potential for the upcoming Winter fixtures.

Peppermint United were drawn against the experienced Real Tangiers in their first game of the Thursday night league. Peppermint had the best start, hitting the back of the Tangiers net early on. An equaliser was not far away though, and both teams traded goals in an action-packed first half. Peppermint had a two-goal cushion at one stage but the duo of Lee and James were on fine form for Tangiers, and managed to square the scores at six-all before the break.

More goals flowed through the second half. At seven-all Tangiers stepped up a notch and created a four goal lead. The Lee and James strike-force proved too hot to handle for the Peppermint defence, as they racked up personal goal hauls of six and four respectively. A late consolation goal for Peppermint saw the game end in a 11-8 defeat, but with Rich Mephan grabbing four goals for himself, the team will definitely be one to look out for and go home with optimism for their campaign.