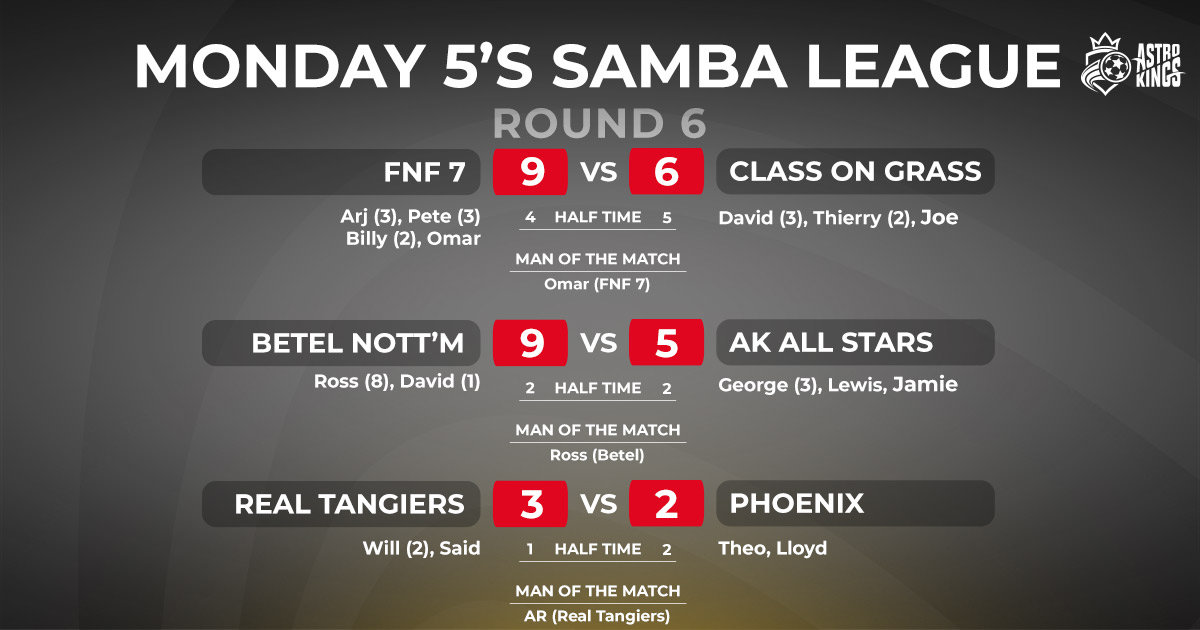 Both teams went into this fixture feeling they had a good chance of victory and in the knowledge that a win would boost their chances of challenging for the title. So, when Omar opened the scoring for FNF 7 by slotting one in off the post; they would have felt it would give them the upper-hand in what was always going to be a close encounter. But Class on Grass were not going to be easily swept to one side and lead five goals to four at the break.

FNF switched keeper, with Mike taking the gloves from Arj who rotated onto the bench. The game remained tight, tied at six goals a piece with just five minutes to go, but as the teams tired and with Arj on the pitch, Class on Grass struggled to keep the FNF at bay. They rattled in three goals in the dying minutes of the game to secure all three points.

Class on Grass have no problem scoring, but their problem of leaking goals could come back to haunt them, especially facing AK All Stars in their next fixture, who themselves will be looking to bounce back from a similarly disappointing result.

It was a top-of-the-table clash this Monday as Betel Nottingham hosted AK All Stars, with just a goal difference of five keeping the home team on top before the game. Neither team wanted to make a mistake and drop points in this fixture and It was the All Stars who drew first blood, going two-nil- up, before Betel grabbed two themselves, making it all square entering the second half.

Betel roared into the second half building a four two lead thanks to their talisman and league top-scorer Ross McMenemy. The All Stars were not planning on going out quietly though, bringing themselves level at four all.

The All Stars had a few new additions to the team this week, and despite having a full squad; could not contain McMenemy. The league’s top two teams exchanged another goal, but Betel piled on the pressure and ended the game with a four-goal cushion. Betel must have one eye on the title now, and with eight goals on the night; Ross will be eyeing-up the Golden Boot.

Phoenix, standing in for Belly Boys, faced Real Tangiers who were still searching for their first win. Real must have thought they were to continue their losing streak, as Phoenix opened the scoring. Real however pulled one back but conceded just before half-time to lead two one.

The second half was low scoring, really down to AR in the Real goal, who pulled of a string of outstanding saves from James, Lloyd and Theo; even using his face to save a thunderbolt from Phoenix’s James.

As AR kept Phoenix out at one end, Will showed skill and determination to first equalise and then put Real a goal up. Finally, three points bagged for Real who will be delighted with their first win.