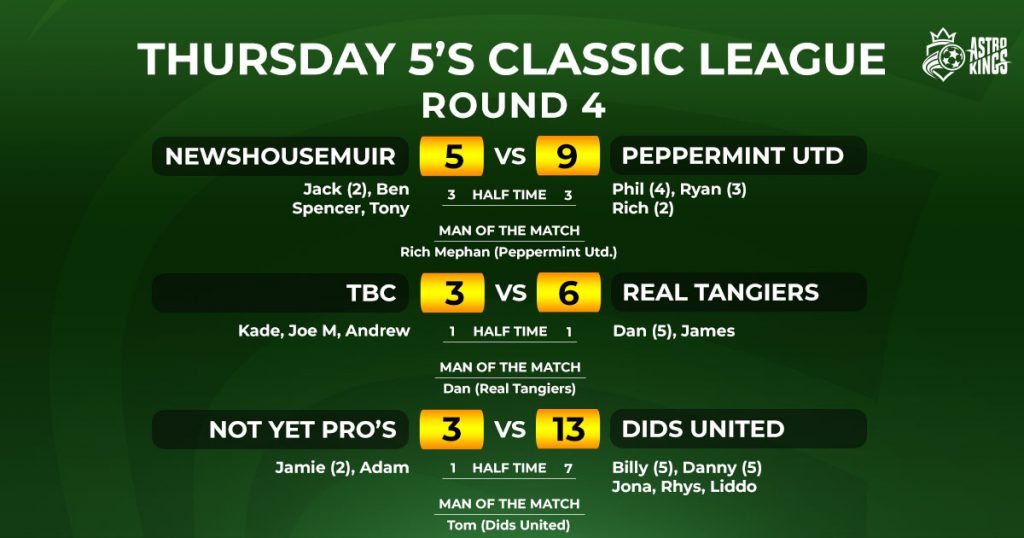 Peppermint United were hoping to land their first win of the season as they took on Newshousemuir who were coming off the back of an important win over TBC. It looked like a fourth defeat on the bounce for Peppermint as Newshousemuir took a three-nil lead early in the first half before Peppermint raised their game to level the scores before the break.

After both teams exchanged goals, Peppermint turned on the style to secure a fine nine-five victory with Ryan bagging a hat-trick, four for Phil, and play-maker Rich Mephan taking man of the match.

Undefeated so far this season, and sitting on top of the league, Real Tangiers were hoping to extend the gap with another three points this week. TBC, who suffered their first defeat last week to Not Yet Pro’s after a perfect start to their campaign, were looking to get back to winning ways. TBC opened the scoring before Tangiers equalised to make it one a piece at the end of a tight first half.

Tangiers logged the first goal of the second half, then their goal talisman Dan in excellent form, put the game to bed. Dan claimed five for himself on the night with a man-of-the-match-winning performance.

League newcomers Dids United have big intentions for the league and began just as they had last week, as they slotted home four goals without reply early in the first half, then held a comfortable seven-one scoreline at the break.

The rout continued in the second half, NYP struggling to contain the Billy and Danny striking partnership. Two late consolation goals took the sting out of the half which saw Dids end the game as 13-3 winners, with five a piece for Billy and Danny.

That’s two wins out of two for Dids, who share a 100% record with only Real Tangiers. But that could all change next week.