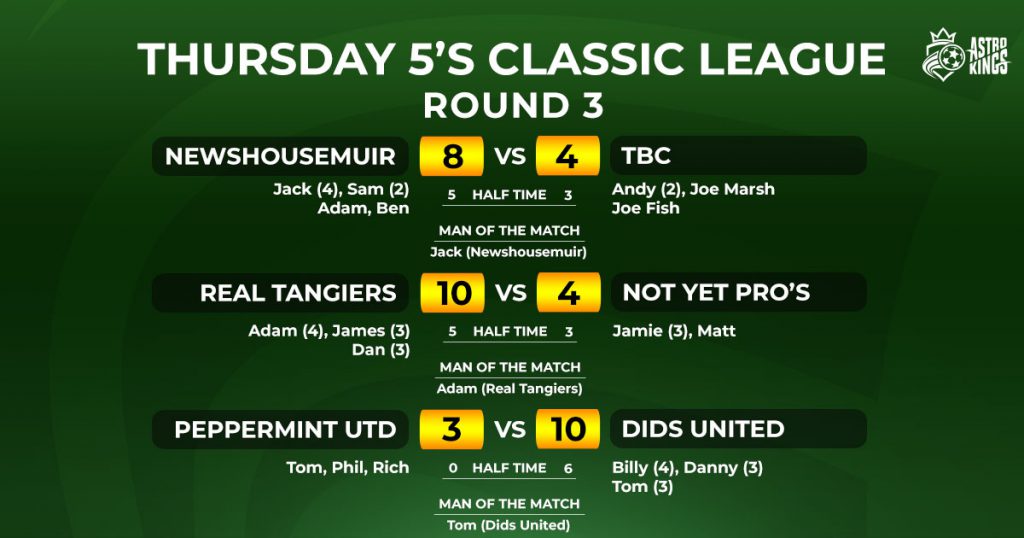 In game-week three of the Thursday Night Classic 5’s League unbeaten TBC were facing Newshousemuir, who were still without a win. Newshousemuir were first of the mark, but saw their lead slip-away as TBC went three-one up. Newshousemuir continued to press through, and four goals in quick succession saw them finish the first half as five-three leaders.

Newshousemuir started to get into the swing of things in the second half, and with Jack Kwiecinski on fine form; they saw the score rise to eight-three. TBC who perhaps ran out of steam having only five players on the night, managed to grab a consolation goal before the ref blew for full time. A big first win for Newshousemuir, and the first loss for TBC.

Definite improvements for both teams over the past couple of  weeks, and hopefully a sign of things to come.

After winning an 11-8 goal-fest in their last game, Real Tangiers hoped to keep up the momentum when faced with Not Yet Pro’s, who themselves come into the game on the back of a win. Both teams went into the game with the intention of securing all three points, and goals flew in at both ends. Despite NYP grabbing the first (an absolute ripper from Adam from the half way line), it was Tangiers that were five-three up at the end of the half.

The second half saw plenty more goals as Tangiers doubled their score. Although NYP had a full squad, they couldn’t close the goal deficit, and managed just a single goal in the half, with Jamie completing his hat-trick. Tangiers scored the final goal of the game to make it a 10-4 victory, and with man-of the-match Adam claiming four, and James and Dan enjoying hat-tricks, Tangiers now sit top of the league on goal difference.

Still without a win this season Peppermint United were drawn to league newcomers Dids United, who wanted a strong opening to their campaign. It was a dream start for the new boys who scored six goals in the first half without conceding.

Not wanting to be too courteous to the new team, Peppermint grabbed the first goal of the second half and hoped to turn the game around. Dids had other ideas though and kept a comfortable goal cushion for the duration of the second half, which ended with a 10-3 scoreline in their favour. A great debut game for Dids, and with hat-tricks for Danny and Tom, and four on the night for Billy, Dids will certainly be a team to look out for.

In fairness to Peppermint, Dids definitely came into the game with ‘first game adrenaline’ flowing, scoring four in the first couple of minutes before Peppermint stemmed the flow and they can feel unfortunate that Chris in goal for Dids pulled off a string of incredible saves. The reverse fixture should be a lot closer.