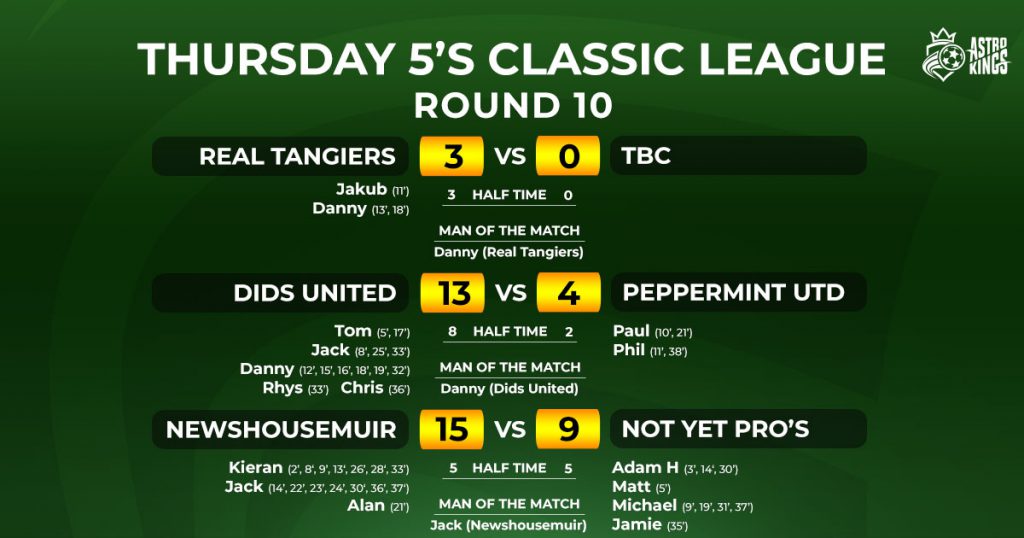 Sitting second in the league just on goal difference, Real Tangiers knew that victory tonight was a must, as leaders Dids United, also on 21 points, were facing bottom-placed Peppermint United. The previous fixture between Real and TBC turned out a six-three win for Real, and they hoped it was to be a similar result, if not better. The game kicked-off and didn’t see a goal until the eleventh minute, when Jakub eventually found the target for Real. The floodgates didn’t exactly open for either team. Danny scored two for Real to take them into the break three-nil up.

The second half was arguably the quietest we’ve seen this season, where goals are concerned. Both teams were defensively solid, and heroics from both keepers created a rare goalless second half. Real will be happy with their clean sheet and three points, maintaining their joint-first position. However, as they face Dids in the last game of the season, who have a better goal difference, it makes the game a must-win for Real.

League leaders Dids United enjoyed  a 10-3 victory the last time these two teams faced, and they hoped not to slip up against a Peppermint United side that have only won one game this season. It took five minutes for the first goal to be registered. Golden Boot and Golden Ball hopeful Danny Brown slotting home for Dids, his first of six on the night. Paul and Phil were on target for Peppermint in the first half, and by the eleventh minute things were all square at two-all. With the title in sight though Dids were hungry for goals, and Jack and Tom helped them head into the break eight-two up.

Perhaps aware of Real Tangiers on their tail in the league, Dids needed goals in the second half to put them out of reach, and goals is what they got. Dids went on a rout and by the end of the match they had secured a 13-4 win, and a crucial improvement their goal difference. Only a disastrous result next week will stop them winning the league, golden boot and golden ball treble.

After a massive win against Real Tangiers in their last game, Newshousemuir were heading into tonight’s game against Not Yet Pro’s with incredible form. Would this momentum move them up the table past an NYP team vying for their league position?  Newshouse’s Kieran wasted no time showing his intentions and found the back of the net after two minutes. NYP had deadly strikers of their own though, in the form of Michael and Adam H, whose contributions helped tie the first half at five goals a piece.

After a close first half the game swung in Newshouse’s favour. Superb finishing from Kieran and Jack saw them end the game with seven goals each, and all three points. A goal-fest for the neutral, and both teams will take a lot away from the game. They’ll hope this goal-scoring form will carry on to the final game of the season next week, and brand new campaigns.