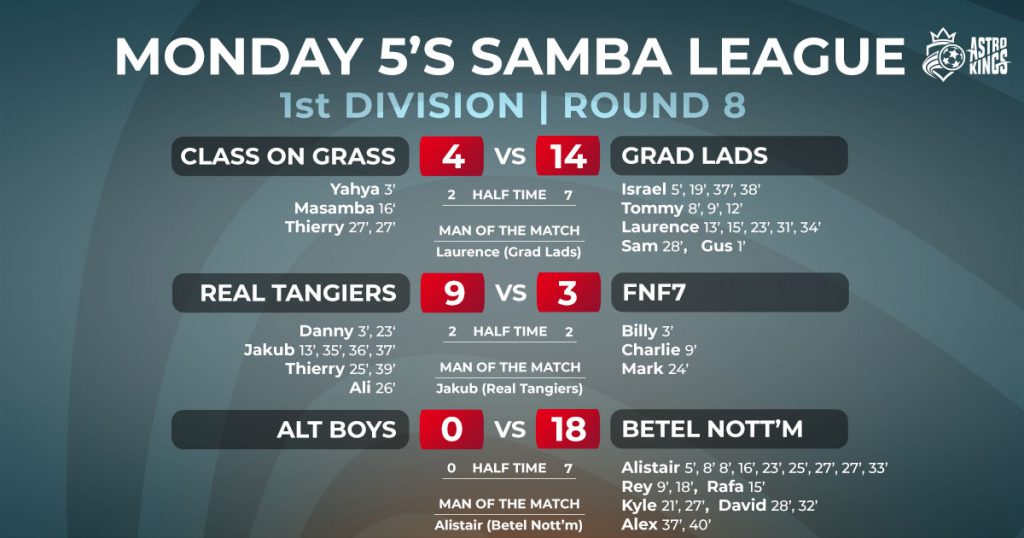 The opening fixture of 2019’s Monday league was a repeat of the opening game of the season. Class on Grass against Grad Lads, which back then saw Class take all three points in a seven-four affair. Would history repeat itself or would the two-week winter break throw the league a curve ball? It certainly looked that way for Class when they opened the scoring in the third minute. This was to be just a lucky break though, as Grad Lads hit back with six goals, including a five-minute hat-trick for Tommy Tam. The half eventually ended with a seven-two scoreline.

Class on Grass needed an epic comeback in the second half, but unfortunately for them, it wasn’t to be. Grad Lads were firing on all cylinders and every outfield player found the target. By the time the ref blew for full time it confirmed a 14-4 win for the Lads. Israel had bagged four, and man of the match Laurence had five to his name. With games in hand, a top spot is within reach for Grad Lads with the right results from the upcoming fixtures.

Real Tangiers faced undefeated FNF 7 this week; winners of every game they played before the Xmas break. The first half was tight and despite an early goal for Real when Danny slotted home, it was two-all at the break.
Perhaps because FNF only had five players on the night or a little too much cake over Christmas, fatigue appeared to kick-in with the scores at three-all. Real exploited the situation and broke into the lead when Thierry grabbed his first of the night. More goals came when Jakub took his night’s tally up to four, and put victory out of reach for FNF. Losing their first game of the season was a bitter pill to swallow, but with two games in hand and still two points clear at the top, FNF are very much still in the drivers seat.

Still to register a point this season, ALT Boys had a massive challenge this week facing last season’s winners, Betel Nottingham. It’s not been an easy title defence for Betel though, who haven’t won since November. For some teams the two week Christmas break can effect performance, but that wasn’t the case for Betel. Entering 2019 like a new team, they showed the league what they’d been known for last season. Alistair McLeish bagged a hat-trick with barely eight minutes on the clock, and Rey and Rafa took the first-half goal haul up to seven, with no reply.

If ALT Boys hoped Betel would take their foot off the gas in the second half and give them a chance to get back into the game, they were bitterly disappointed. It was goals galore for Betel, with David, Alex and Kyle each scoring a second half brace. With his nine goals on the night, Alistair took man of the match, in an 18-nil whitewash. Betel face Grad Lads next, and a victory could see them move into third and make their title defence very much a possibility if FNF stumble.