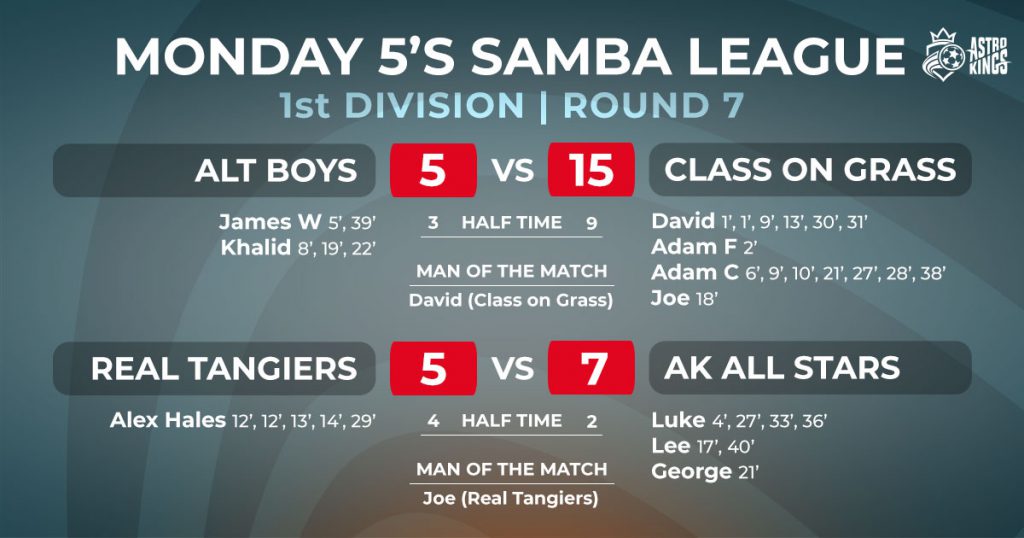 In the first match-up earlier in the season it was Class on Grass that took the glory, winning 11-3. ALT Boys hoped it wouldn’t be a repeat performance, but were as shocked as everyone when David bagged not one, but two first-minute goals for Class. Heading into the break Class led nine-three with David and Adam C having notched four and three goals respectively.

The second half didn’t fare much better for ALT Boys as more goals flew in and Class kept a healthy lead throughout the half. James W grabbed his second of the night for ALT Boys in the dying seconds, but it was a mere consolation. Adam C’s seven, and man-of-the-match David’s six had this goal-fest gift wrapped well in time for Christmas.

After drawing five-all in game week three both teams had something to prove tonight, and AK All Stars knew that beating Real Tangiers would put them level on points. It started well for AK, when Luke opened the scoring in the fourth minute. However Tangiers had an ace up their sleeve. Usually seen with a cricket bat in hand for Notts and England, batsman Alex Hales showed he’s handy with his feet too, and sent sent AK’s wicket-keeping for four, in 14 minutes. Lee puled one back for AK and saw the half end four-two to Tangiers.
Unfortunately for Tangiers the lead they’d built up in the first half slowly began to slip away in the second. With George, Luke and Lee all on target for AK, they saw a four-two half-time lead eventually turn into a seven-five loss.  Alex might have expected to pick up the Man of the Match award following five quality strikes, but despite conceding seven on the night, Joe Parker in goal for Tangier’s, picked up the accolade after a string of incredible saves.
Tangiers will be disappointed at throwing a lead away. Credit to AK who never gave up, and now see them heading into the Christmas break level with Tangiers on points, but with a better goal difference. An incredible game.