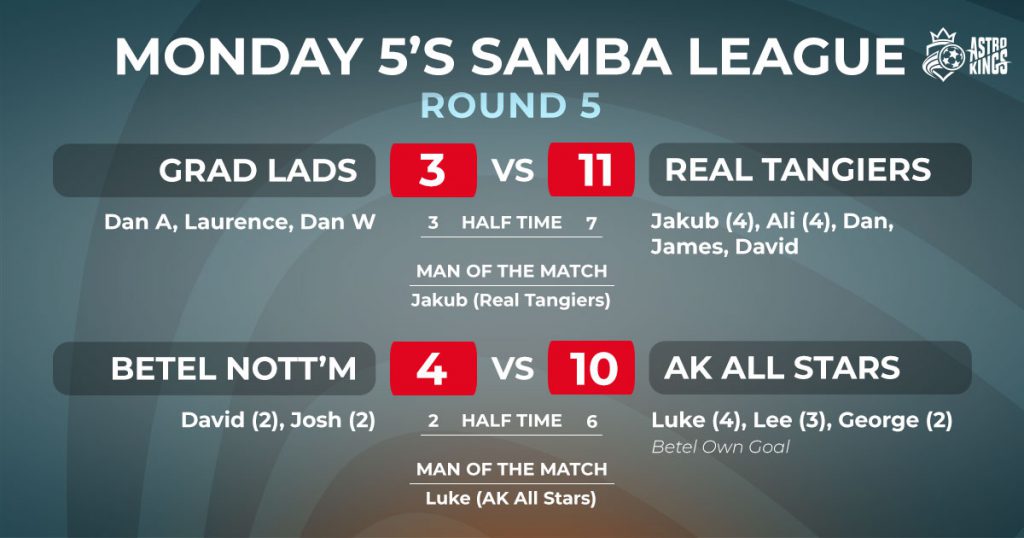 After a big 10-1  win against Kimbo Slice last week, Grad Lads were fully expecting another three points against a Real Tangiers team that have only had one win in their last three. Both teams were up for a very attacking first half, and after Dan opened the scoring for the Lads in the opening minute, goals were flying in at both ends. By the time the ref blew for half time, Ali had already scored a hat-trick for Tangiers and his team were seven-three up.

With a four goal cushion Tangiers had a second half plan to protect this conformable lead, and they certainly did. Grad Lads drew a blank for the whole second half and Tangiers raised the deficit, with goals from all outfield players, and four each for Ali, and man of the match Jakub.

Despite the loss Grad Lads still sit in second place and are very much still in the title race, and now with a big three points this week, Tangier’s campaign has just come alive.

It’s been a bumpy start for AK All Stars, only taking a point from their first three games, but recording an important win against ALT Boys in a 23-goal thriller last week. It’s been a similar case for Betel Nottingham, who can’t seem to maintain a winning streak themselves. It was a cagey opening few minutes, until Luke broke the deadlock for AK in the fourth minute. Not long after, the floodgates were open and AK dispatched five more goals, with Betel only grabbing two the entire half, both courtesy of Josh Ipademola.
Betel needed a comeback in the second half but unfortunately it wasn’t forthcoming. Luke opened the second-half scoring with his hat-trick goal for AK, and after a Betel own goal, the team needed a miracle. Despite two late goals from David Zakulec, they failed to spark a comeback, as Luke’s fourth AK goal in the 34th minute was the nail in the coffin. The match ended 10-4 with AK’s Lee enjoying a hat-trick and Luke taking the man of the match for his superb performance.
Betel will be hoping to improve their form as they face second place Grad Lads next week. Meanwhile AK’s target is to make it three in a row against top of the league FNF 7 when they face-off next week.