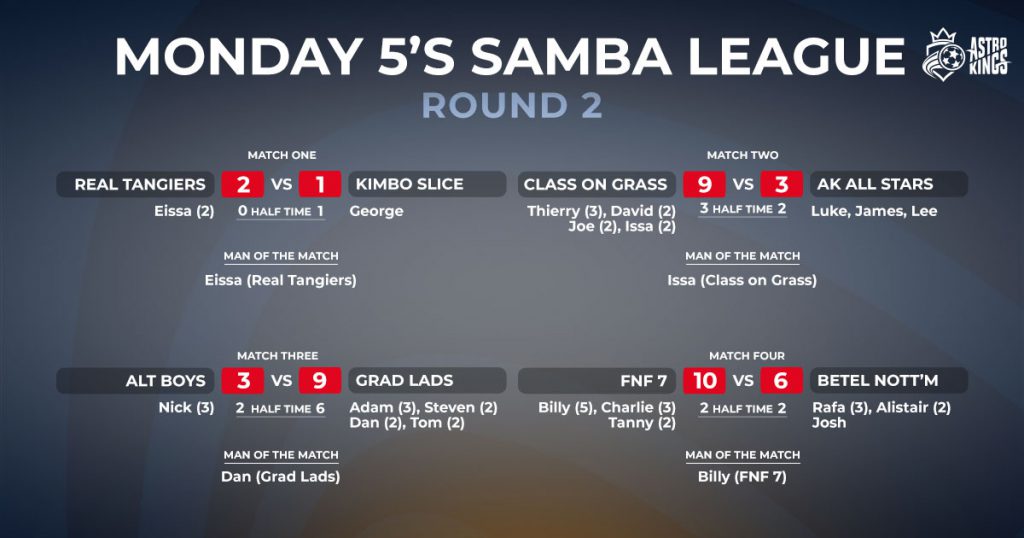 In Game Week Two of the Monday 5’s league, Real Tangiers, fresh off the back of an FNF7 whipping, were hosting Kimbo Slice. Kimbo were hoping to claim another three points after defeating AK All Stars in their opening game of the season last week. The match started off very cagily, both teams defending well and neither team dominating possession, it was Kimbo who broke the deadlock when George grabbed the only game of the half.

The second half was an equally low-scoring affair. Great defensive displays and superb goalkeeping from Tangiers kept Kimbo in a defensive hold for the whole half and ended their scoring for the night. Tangiers scored twice and held on for a two-one victory – possibly the lowest scoring game the league will see all season.

Class on Grass lost both fixtures to AK All Stars last season and knew preparation was key if they were going to get anything from this game. Would arriving at Astro Kings in the hours before the match to put in some shooting practice and training pay dividends?
AK were the first on the score-sheet, two goals coming early in the half with the second curled-in from the halfway line by James past Issa, but this would not be history repeating itself, as AK conceded three before half time and Issa had his revenge. After swapping goalkeeping duties with Massamba, Issa picked up the ball in midfield, coolly nutmegged James, and calmly fired past Adam in the AK goal.
The opening minutes of the second half saw goals from both sides, but at four-three to Class, it all fell apart for AK. Poor work rate and slack defending once again proved their downfall, just as it had last week against Kimbo Slice. Class dominated the final ten minutes and scored freely, extending their lead to nine-three. A hat-trick for Thierry, who could have had more, plus a brace for Issa whose solo saw Class on Grass take a well deserved victory. AK need to regain their form from last season if they are to avoid becoming the leagues Manchester United – just there to make up the numbers.

New additions ALT Boys faced Grad Lads who came into the game with confidence after beating Class on Grass the previous week. The first half was a high-scoring affair with the net rippling at both ends. Nick’s double for ALT Boys had them levelled at one stage but Grad Lads stepped-up a gear and ended the first half six-two up.

In the second half the Grad Lads really started to gel. With Dan pulling the strings, and with effective overlapping ensured every outfield player got on the score sheet. Alt Boys’ Nick scored a late goal to claim his hat-trick, but it wasn’t enough to take points from a solid Grad Lads team.

Last season was decided on goal difference with Betel Nottingham just taking the edge, so tonight’s match could have delivered one of the biggest results of the season for FNF 7, who fell short by just three goals in their last campaign.

These two league hopefuls knew that taking three points off each other tonight could be deciding factors in the season. FNF got off to a great start and grabbed the opening two goals, but Betel have goal-scorers in abundance and brought the scores level at the break.

The second half kicked-off and it was still anyone’s game. Both teams battling hard and with the game even at six-all; it was too close to call. However it was to be FNF’s night as four goals in the later stages of the game ensured they took a massive three points from their title rivals. A great game for the neutral, with hat-tricks for Betel’s Rafa and FNF’s Charlie. Plus last season’s player of the season, Billy, scoring five on the night to take his tally to 14 in just two games and surely make him favourite for the golden boot once again.