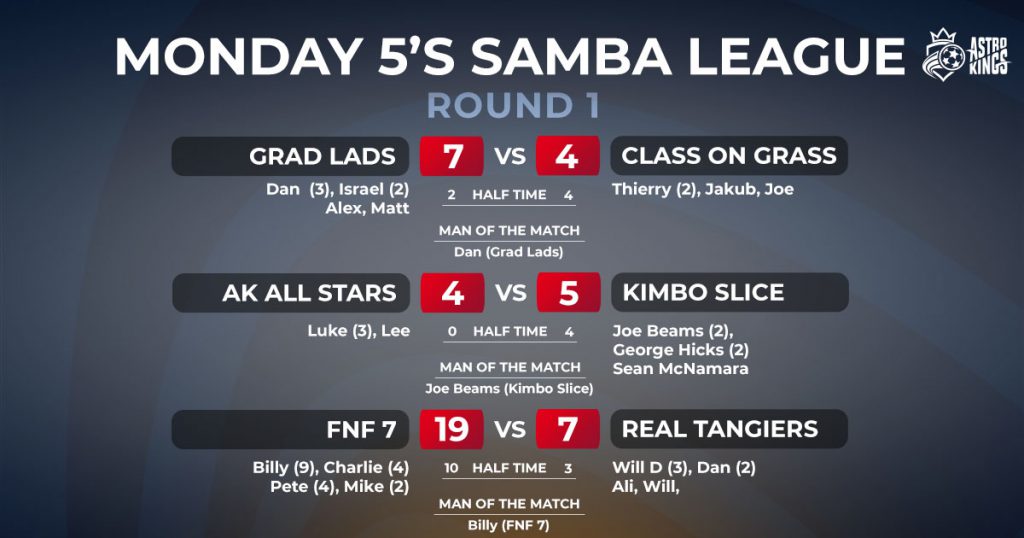 Finishing a respectable mid-table last season, Class on Grass league debutantes faced Grad Lads in their opening game. In a quirk of the schedule, Class had actually beaten Grad Lads 4-0 in a friendly the week before, so it was no surprise when they opened the scoring, and built a three-goal before Grad Lads managed to pull one back before the break to trail four-two.

Although in the lead, Class had lost two games last season that they were winning at half time, so needed to remain focused to avoid a repeat.

As the second half got underway, it soon became the stuff of nightmares for Class as league newcomers Grad Lads turned their two-goal deficit into a three-goal lead. Dan bagged a hat-trick for Grad Lads as they shut-up shop to keep a second half clean sheet. Class on Grass will be disappointed after a strong first half, but credit to Grad Lads who start their debut season with a big three-points.

It’s often said that football’s ‘a game of two halves’, and tonight’s match-up between the two certainly validated the phrase as Kimbo took a comfortable four-nil lead, against a misfiring AK side who had beaten them comfortably just the week before.
AK certainly needed a better second half display and any sign of new-season-nerves were shaken off as they slotted home the first goal of the half. Last season’s top scorer Luke was on fine form, landing a hat-trick, and with the score at five-four AK had the momentum and time to take the points but something wasn’t right with their attitude and the equaliser never really looked like coming. Kimbo held-on effectively to end the game five-four winners. A big win for Kimbo Slice who lost to AK All Stars twice last season; they’ll be delighted with all three points.

Summer league runners-up FNF7 were just three goals shy of taking the Monday Night title, so they knew this Winter campaign has to be all about goals, goals, and more goals. Also hoping to land their first title after coming in a respectable fourth last season, was Real Tangiers.

FNF stormed into a four-nil lead before an exchange of goals with Real playing good football. However, this didn’t deter the goal-hungry FNF who were peppering the Real goal to lead 10-3 at the break.

FNF could have rested on their laurels, sat back and protected their seven goal cushion, but this wasn’t on the agenda. Perhaps as the feelings of disappointment from losing the league on goal difference were still raw, the team went all-out and put on a masterclass of finishing. Real played quality football themselves in the second half and bagged four goals, with Will D enjoying a hat-trick. This wasn’t enough though as FNF were on a rampage and slotted home nine times in the second half, with all outfield players on the score sheet. Last season’s Player of the Season and Golden Boot winner Billy claimed nine on the night.