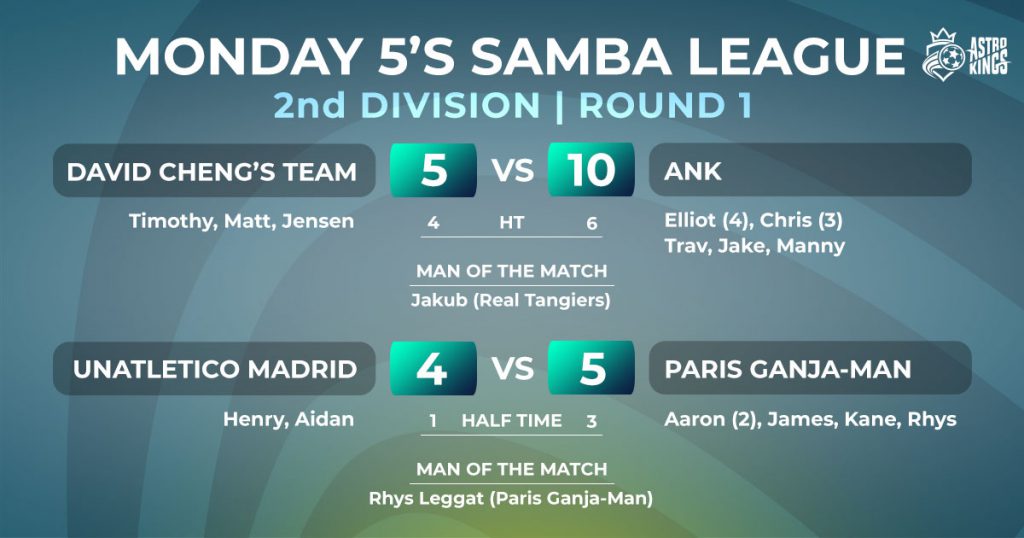 Kicking off the new Monday night league’s division two was Unatletico Madrid and Paris Ganja Man. The new league got off to a flying start when Kane rolled one in for PGM after 2 minutes. Aidan pulled one back for Madrid but saw the half end three-one to PGM.

Madrid opened the second half scoring when Henry Collier got the first of his three goals on the night. The rest of the half was a well-matched battle, which saw PGM just take the game with a close five-four victory. Pulling the strings for PGM was Rhys Leggat who’ll be delighted with his man of the match performance and the perfect start to their season.

Keen to get their season’s started with a big win, David Cheng’s Team and ANK were both in a scoring mood in this match-up. The first half saw ten goals, coming from all angles. Both teams had talent in abundance but with help from Chris’s 11-minute hat-trick, ANK went into the break with the upper-hand, six-four up.
Perhaps due to only having five players on the night, Cheng’s Team couldn’t keep up the momentum that saw them bang in five goals in the first half. Only one was forthcoming for them, courtesy of Jensen. ANK on the other hand scored freely, with five players making the score-sheet. Grabbing four goals and the man of the match, Elliot Wilson will certainly be one to watch for the golden boot, and promotion chase.