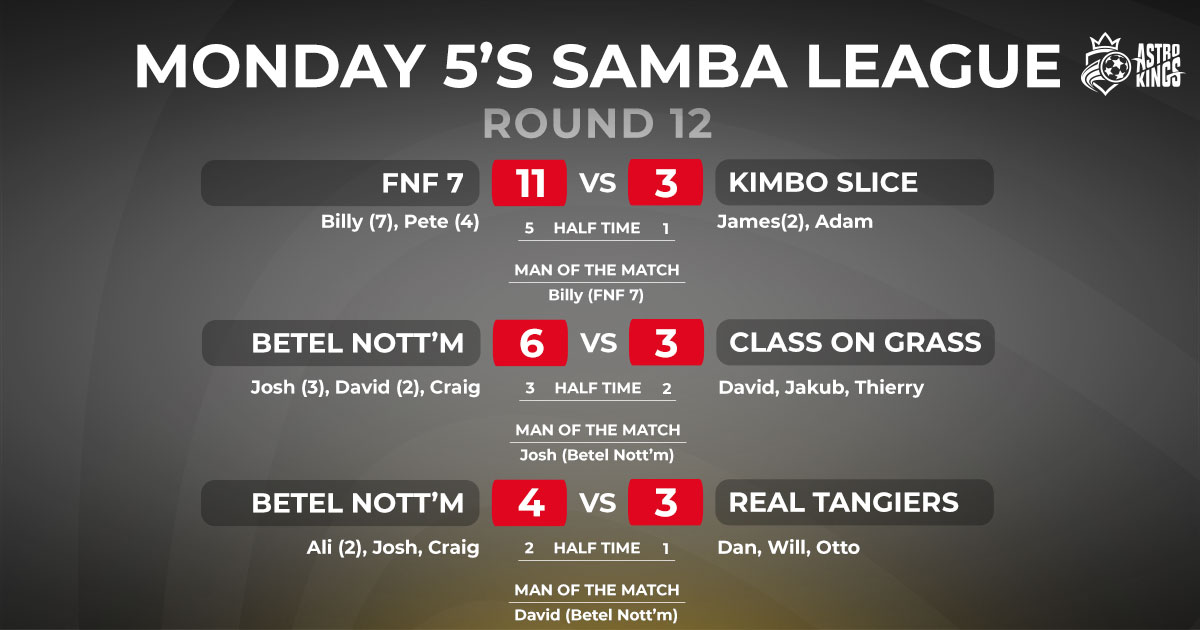 With double points and double goal difference on this game, FNF 7 had to win and win big, to have any chance of nicking the league from Betel Nottingham in their final game. Standing in their way was Kimbo Slice, themselves feeling optimistic after landing their first win last week.

FNF kicked-off and clearly meant business as they scored the first two goals of the evening. Kimbo pulled one back, but FNF’s Pete – and in particular Billy – were not going to let their opportunity go, and extended FNF’s lead to take the score to five one at the break. One of these goals despatched from the penalty spot after keeper James Mortimer was adjudged to have handled outside the area whilst under pressure from FNF’s Arj, who was chasing a delicate through-ball.

Leading five-one meant a +8 on FNF’s goal difference, which would undoubtedly leave too much to make up in their final game. In such a tight league, FNF knew that the title could be decided on goal difference, and entered the second half with the hope of racking up more goals. FNF opened the scoring in the second half and Kimbo replied quickly with a goal of their own, but as they pressed- gaps appeared at the back and FNF took advantage. Billy was on fire, shots hit with power and accuracy from all over the pitch. One strike rocketed from the halfway line into the far top corner drawing applause from those watching and a shake of the head from Kimbo’s keeper, there was nothing he could do.

FNF 7 now face Betel Nottingham in their final game of the season and could nick it at the death.

Leaders Betel Nottingham faced Class on Grass in what was an important game for the season-long league favourites. Due to postponing last week’s fixture Betel kicked off their double-game week with style, going one-nil up before Class on Grass responded in kind, before going two-one up at the break.

Betel needed a come back if they were to keep any hopes of winning the league alive, and they certainly did in the second half. Goals from Craig, David and a Josh hat-trick secured all three important points. A late consolation goal couldn’t bring Class on Grass back into the game and the match ended six – three. The first win of the night in the bag for Betel, but would they run out of steam for their important final game of the evening?

A win in their second fixture of the game-week would put Betel Nottingham top of the league, and in the driver’s seat for next week’s decider against FNF 7. But would Betel have the stamina to win two games in one night? Hoping to throw a spanner in the works was Real Tangiers, a decent outfit in front of goal, with 14 goals in their past two games.

Betel got a great start, scoring twice without reply before Tangiers pulled one back just before half time. Early in the second half Tangiers equalised, but Betel dug deep and put themselves in front once again. Betel must have been feeling the strain and let their lead slip, but with sheer determination Betel battled back to secure all three points with a late goal, and held on for a narrow victory. Betel delighted with two victories out of two on the night, and all eyes are now on next week’s fixture which will decide the Monday Night league winners.