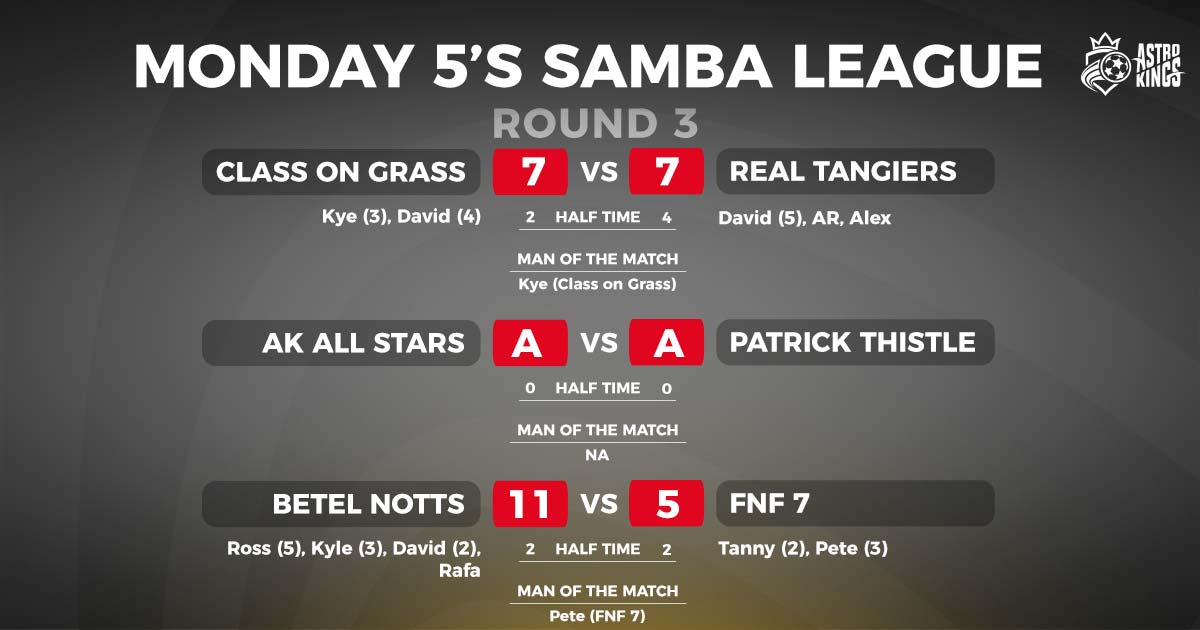 Two teams without points clashed in the early kick off and something had to give – at least one team was going to put points on the board.

At half time, it looked as if it would be Real who would pick up three points as Class on Grass began without both Captain, who was unavailable, and Vice Captain/Goalkeeper who was cycling as quickly as he could to get to the ground.

Leading 4-2 at the break, Real were reliant on goals from Danny Rawling who picked up 5 of their 7, but the second half saw a comeback. With Goalkeeper arriving and taking the gloves, goals from Kye (3 and MoM) and David (4) brought the game level to finish 7-a-piece. A very even game on all levels and both teams will feel a win is just a game away.

AK All Stars A v A Patrick Thistle

The evenings’s second game drew two undefeated teams together and although both were missing some key players, the first half opened competitively.

With the score 2-1 to Patrick, Kane Gutteridge collided with a teammate and fell awkwardly dislocating his knee as the third goal went in. Eventually the decision was made to abandon the match and replay at a later date.

Despite the injury Kane left the ground in good spirits and we hope to have him back in action soon.

New boys FNF 7 came up against one of the leagues form teams, Betel Nottingham, who posses the league’s Aguero, Ross McMenemy.

With a bare 5 players, FNF 7 were always going to struggle without fresh legs to bring on, but still brought some excellent players and Arj produced one of the best goalkeeping performances seen at Astro Kings, despite what the final score may suggest.

With two sets of fresh players, the game was well fought during the first half with the lead changing hands, before an equaliser from Betel close to half time levelled the game.

The second half began like the first with goals scored by both teams to see Betel lead by just one goal at 5-4. Unfortunately, that’s when the gas started to run out for FNF 7. A succession of goals for Betel saw them pull away to give a comfortable final scoreline, although FNF 7 did have the final word with the last goal and Pete picking up Man of the Match.

As for Betel’s Aguero? Seems a bit harsh calling Ross, Aguero. Ross picked up 5 compared to just the 3 for Aguero against Huddersfield.