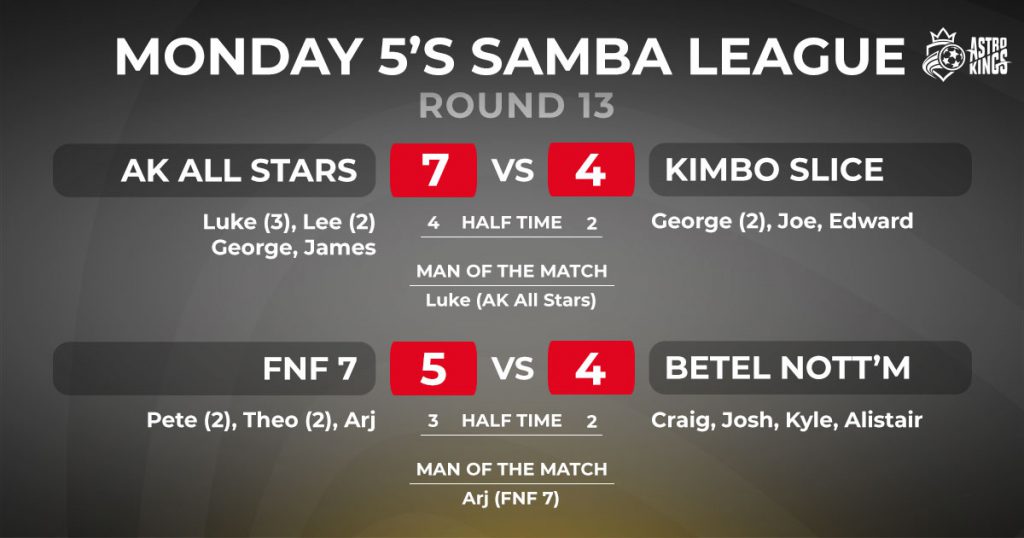 With the league title mathematically out of their grasp, AK All Stars hosted Kimbo Slice with just pride and a slim hope of second place to play for.

Neither team wanted to end their season in a loss and both turned out, hoping to end their seasons on a high. Kimbo opened the scoring and looked to play a high tempo game with a seven-man squad versus AK’s five, but AK’s defend-and-counter strategy paid dividends, taking them into the break with a four-two lead.

The second half played out in a similar fashion with Kimbo’s tricks and skills finding scant reward against a resilient AK team who were showing the discipline they lacked the week before when they crumbled against FNF7. For every shimmy from Kimbo, there was a hoof clear from AK, but that was all they needed and a 3-2 second half in favour of AK closed out the season in satisfactory fashion for AK. Kimbo meanwhile have the skills to be a threat next season and will look to be just that.

To use the old adage about battles and wars was apt as FNF7 may have won the battle, but Betel Nottingham won the war. As despite the loss, the league favourites picked up the title on goal difference.

In a closely fought league, the title came down to a final game decider with a top-of-the-table clash where everything was to play for. Betel started the game atop the league by three points, knowing even a slim defeat would guarantee them the title. By contrast, FNF 7 had to win by at least five goals to see them crowned league winners.

When these two faced each other early in the season, it was Betel who were the victors in an 11-5 goal fest. So if the teams finished equal on goal difference, it would be Betel taking the glory through their head-to-head result.

FNF were the first on the score-sheet, before a Betel goal leveled the scores. FNF pushed for further goals, bagging another two before Betel returned fire and the half ended three-two. FNF’s half-time team-talk no doubt focusing on the need to extend their lead by a further three goals, but without Billy and a clearly injured Arj, it was a huge ask.

FNF 7 could see their name in lights as two goals came against Betel who had only lost one game all season. Digging deep Betel pulled back two goals and the games intensity dropped as FNF knew they were not going to be able to catch Betel who were defending effectively and when the ref blew the whistle; the league was theirs.

An excellent effort from both teams but the best team deservedly took the title and will collect their trophy next week.