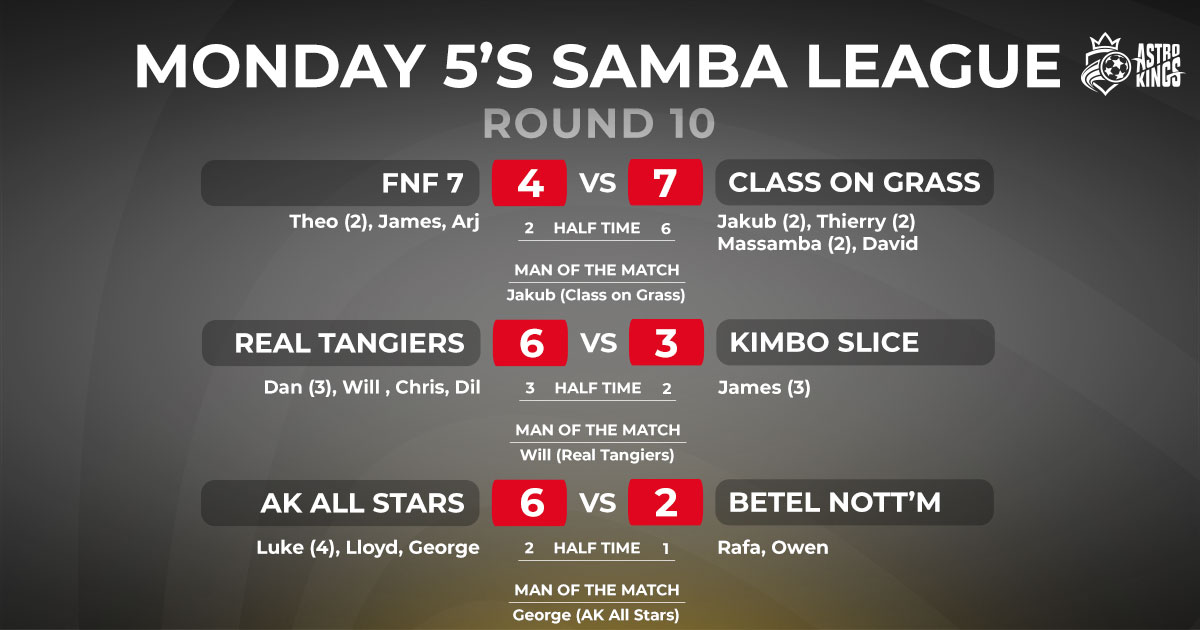 Hoping to get their fifth victory in a row tonight FNF 7 were drawn against Class on Grass who themselves wanted to keep up the momentum from last week’s massive 14-8 victory against Real Tangiers. The game started strongly for the visitors who went one-nil up early. FNF managed to equalise but Class on Grass played brilliantly and extended their lead with another three goals before FNF could reply. The half ended six-two.

The second half kicked off and FNF really needed to catch up to keep their title hopes alive. This wasn’t to be as Class on Grass showed no mercy, themselves still focussed on taking the league. More shots hit the back of FNF’s net, and Class on Grass gave themselves a four goal cushion. FNF managed to score twice in the second half but the game ended seven -four to Class on Grass. An important game for them, which keeps them in the running for the title, FNF meanwhile drop points for the first time since August, but still have potential to win the league.

Having lost their previous fixtures; both teams were playing for all three points tonight in an important mid-table battle. Tangiers were the first to open their goal accounts, but Kimbo equalised, through James’ clinical finishing. Tangiers scored two more, and conceded just before the break to see the first half end three-two.

Desperate to secure all three points Tangiers piled on the pressure in the second half, scoring the first goal of the half. Kimbo hit back with a goal themselves, James securing a hat-trick, but they couldn’t stop Tangiers’ attacks, who scored another two, and extended their lead. The game ended six -three and Tangiers will be delighted with all three points. Newcomers Kimbo will be optimistic with their eight goals in two games, and have confidence that their first league win in just around the corner.

In a top-of-the-table clash AK All Stars played host to top scorers Betel Nottingham. It was the visitors that had the best start as Betel opened the scoring. The All Stars were determined not to let their title dreams die as they equalised and went a goal up before the end of the first half.

Usually both high-scoring teams; but there was too much to lose in this fixture so both teams defended like the league depended on it. Betel equalised, and with both teams now locked on two goals a piece, the game – and the league – could now be anyone’s. A draw was not on the cards though, as the All Stars went on a scoring spree and ended the game six-two winners, with Luke bagging four but not able to claim Man of the Match – that honour went to George, whose mazey run and goal was probably the one which changed the course of the game.