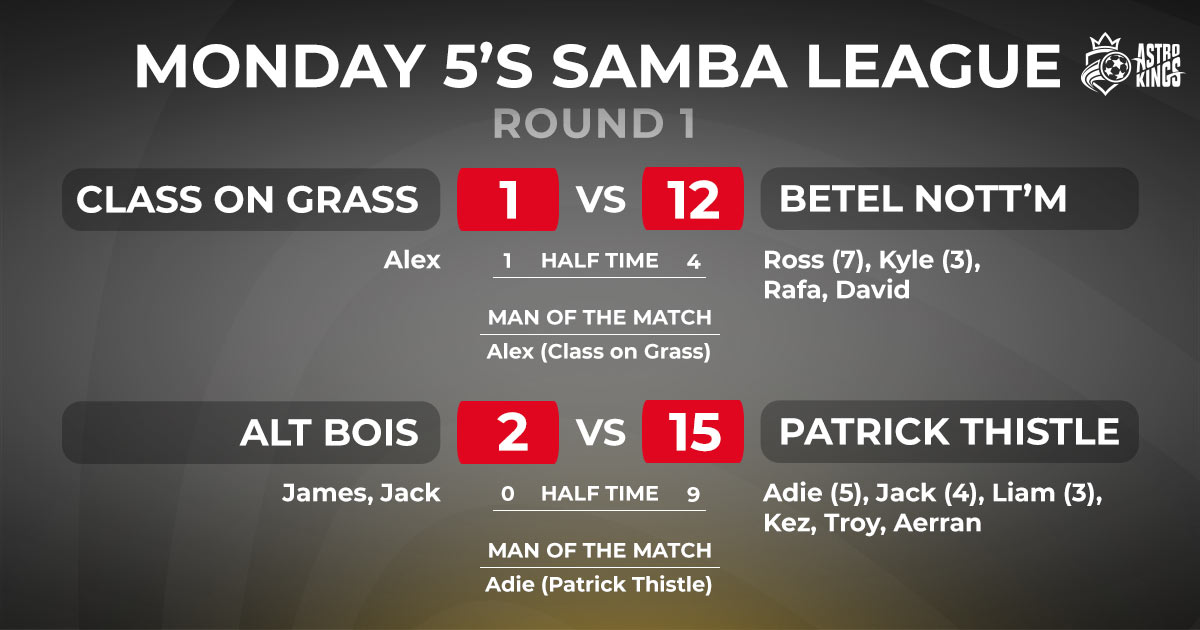 The youngest team in the tournament, Class on Grass, opened up at home to Betel Nottingham and unfortunately found their opposition in good form when they stated their league intentions early; the first two goals of their campaign before Class on Grass’s Alex finding the net with his teams only goal of the game.

The second half turned into an exhibition for Betel, with Ross ‘Goal Machine’ McMenemy scoring for fun to lead the race for the golden boot with 7 goals. Class on Grass struggled to convert chances and had a goalless half. Showing signs of promise; they will certainly look to improve and finish chances as the league continues. With Betel gelling as a team very early in the season and having no problem finding the goal, these will certainly be a team to watch this season.

It wasn’t all bad though, Class on Grass picked up the Man of the Match award and it definitely wasn’t as one sided as the score made out. There is promise there.

The opening game of Astro Kings’ new Monday Night 5-a-side League saw ALT Bois face Patrick Thistle with Thistle showing they could well be the favourites for the title. Thistle found the net on nine occasions while ALT Bois were unable to find any sort of reply and behind 0-9 at half time.

ALT Bois fared better in the second half side by hitting the back of the net twice after two more Thistle goals. Unfortunately that was as good as it got for and the dangerous duo of Adie Miles and Jack Corthorn proved too much for Alt Bois, with Thistle scoring seven goals on the bounce and all outfield players opening their goal scoring accounts.