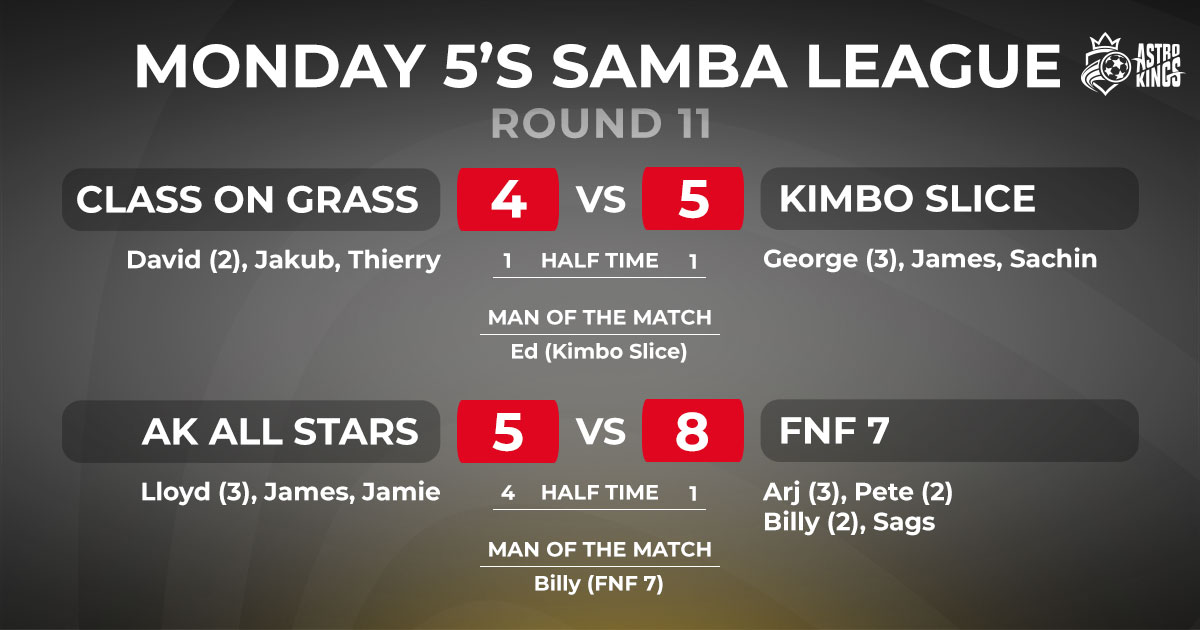 After picking up their first three points in four games last week, Class on Grass were hoping to continue their form when faced with league newcomers Kimbo Slice, who themselves are still waiting for their first Astro Kings Monday League victory. Kimbo drew first blood, slicing through the opposition’s defence early in the first half. Class on Grass equalised and held on to the end of the first half, which ended one a piece.

What was a tight first half soon made way for a high scoring run of football. Kimbo scored then conceded, then both teams traded goals before Kimbo gave themselves a two-goal cushion. At five-three the game looked wrapped up, but Class on Grass kept pushing and scored a fourth. It was to be a consolation goal though as the ref blew for time at 5-4 to Kimbo, who will be delighted with taking all three points, and their first win of the season.

Going into this match both teams have high hopes on grabbing the Monday League title. Both teams knew a win was needed to put pressure on Betel who still lead the league despite going down 6-2 to AK All Stars last week.

The teams didn’t disappoint, and spectators enjoyed a roller-coaster of a game. FNF opened the scoring, but AK equalised then proceeded to dominate FNF for the rest of the half to lead four-one at the break. It was easy for AK; The game was won, the title heading home and attention switched to the next game against Kimbo Slice on the final night of the league.

However, there is nothing like a slice of hubris pie to sober the thoughts of a team and the second half was more one sided as the first… but not in the way anybody who witnessed the first would have expected.

FNF scored and grew in confidence. Three goals without reply, bringing the scores level at four-all. AK could feel the victory slipping away and got back into the game and score their fifth but it was a nothing more than a consolation. FNF were not letting AK get back into the game. As the Adrenalin flowed, AK became disjointed and crumbled, unable to do anything as FNF bagged a further three goals to put the nail in the coffin for the All Stars.

A great comeback for FNF who now share the top-spot with their opponents they defeated on the night, as well as Betel Nottingham, who all have 27 points but surely it’s all over for AK who have suffered three defeats now.